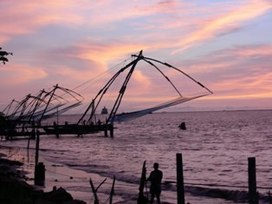 Fort Kochi is a region in the city of Kochi in the state of Kerala, India. This is part of a handful of water-bound regions toward the south-west of the mainland Kochi and collectively known as Old Kochi or West Kochi. Adjacent to this is Mattancherry . In 1967, these three municipalities, along with a few adjoining areas, were amalgamated to form the Corporation of Cochin.Kochi was a fishing village in the Kingdom of Kochi in the pre-colonial Kerala. The territory that would be later known as Fort Kochi was granted to the Portuguese in 1503 by the Rajah of Kochi, after the forces of Afonso de Albuquerque helped him fighting the forces of Saamothiri of Kozhikode. The Rajah also gave them permission to build a fort near the waterfront to protect their commercial interests. The first part of the name Fort Kochi comes from this fort, Fort Emmanuel, which was later destroyed by the Dutch. The Portuguese built their settlement behind the fort. They also built a wooden church, which was rebuilt in 1516 as a permanent structure, today known as the St Francis Church. Fort Kochi remained in Portuguese possession for 160 years. In 1683 the Dutch captured the territory from the Portuguese, destroyed many Portuguese institutions, particularly Catholic including convents. The Dutch held Fort Kochi in their possession for 112 years until 1795, when the British took control by defeating the Dutch. Foreign control of Fort Kochi ended in 1947 with the Indian independence.